In 2014 the City of Jordan began an investigation into the preliminary effective maps released by FEMA in 2006 for the Sand Creek river which flows through the City limits of Jordan. This 2014 effort found that the modeling used to produce the 2006 maps contained several key errors in the hydrologic study and associated mapping. Water surface elevation errors were found on several locations of the 2006 maps. For example, at Hwy 169 near Hwy 282 the water surface elevation listed on the map were three feet higher than a more accurate model which was developed. The City of Jordan appealed the FEMA maps and was successful in getting their accuracy improved.

In July of 2018, revised preliminary effective maps were issued by FEMA showing the updated floodplain extents for Sand Creek based on improved modeling. The maps reduced the estimated 100 year flood elevation in the City by multiple feet. Despite the reduction in estimated flood elevation, the former mapping by FEMA inaccurately identified inundated areas, and therefore the actual number of affected structures remained about the same between the 2018 Preliminary Effective maps and the 2006 maps. 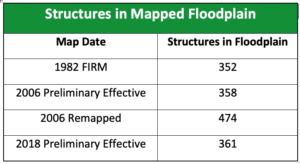 As of 2016, there were 56 structures carrying flood insurance in the City at an average cost of approximately $2700 per year. Nationwide, FEMA expects that flood insurance rates will increase an average of 8% annual. Per federal regulations, all houses purchased using a federally backed mortgage must carry flood insurance through the life of the mortgage. Rates for each property vary based on flood risk, however the need for flood insurance can make selling a home significantly harder due to its added costs. Studies have also shown that being in a mapped floodplain commonly reduces property values by 5-10% in comparison to similar homes located outside of the designated floodplain area.

These insurance costs are massive when considered across all properties in Jordan and over years to come. Worsening this impact, federal subsidies on the flood insurance are being removed making the cost of insurance greater each year. In 2020, the cost of current flood insurance policies within the City of Jordan was estimated to exceed $200,000 annually.

Recognizing these annual costs to Jordan residents as well as the need to attempt to protect residents from flooding, the City of Jordan commissioned a study in 2018 to consider flood control improvements. This feasibility study was proposed to gage which flood protection efforts would provide the greatest risk reduction for the City. Three potential flood mitigation efforts were reviewed:

A full copy of the 2018 flood control feasibility study is available in the project documents section below. In brief, the study found:

Construction of a new certified levee between Varner Street and TH 282 (levee segment 1), along the south side of First Street. Purchase of private residential properties would be required

Improvement of existing levees from TH 282, across 169, to Syndicate Street (levee segments 2 and 3)

Construction of a 8.2 acre ‘dry pond’ to temporarily hold runoff generated from behind the levee and construction of a pump station to discharge that runoff from the dry pond, over levee segment 3, to Sand Creek

The solution would require partial or full acquisition of land affecting 21 properties in total. Affected property owners would be compensated. Recognizing impacts to private property are not desirable, the City conducted an open house in May, 2019 to collect feedback from affected property owners. Information presented at that open house can be found below.

If implemented, construction of the certified levees and associated improvements will remove structures from the floodplain as follows:

The acronym “SFHA” in the table above means “Special Flood Hazard Area”.

The City has submitted an application to the MnDNR for funding of the flood control improvements. The full project cost is about $11M for all levee segments and components. The City’s capped cost share is $2.44M based on a MnDNR rule and calculation which utilizes the City’s current population and median household income. MnDNR funding may come to the City following the upcoming and future State legislative sessions. If the MnDNR receives funding from the State Legislature for its flood hazard mitigation program, the City anticipates receipt of a grant to start design and property acquisition efforts in 2020 and 2021.

Construction of the flood control improvements may begin as early as 2022 or 2023 should the project receive funding and the City of Jordan wish to proceed with the flood protection measures.

A flood event occurred on March 14 – 19 which was caused by Sand Creek ice that jammed up in an area downstream of the Jordan city limits. While there was little precipitation and snow melt occurring at the time compared to how much water Sand Creek receives during a 100 year rain event, the ice jam caused Sand Creek water to back up water into the City to about 100 year levels in downstream parts of the City. The Valley Green Mobile Home Park was partially flooded and damage to Holzer Park occurred.

The cause of ice jam flooding is random in nature and largely inconsistent with the type and impacts of flooding during heavy rainfall / runoff flood events. The proposed levees would still help prevent property damage and benefit public safety caused by ice jams, though. The City is also looking at separate improvements and considerations to attempt to prevent, prepare for, and react to ice jams should they form prior to permanent flood control improvements being implemented.