The City of Crosslake is considering a project to improve deficiencies at the Crosslake Wastewater Treatment Facility. The proposed improvements being considered include the following:

The proposed improvements are estimated to cost around $1.6 million and would be constructed during the summer and fall of 2017. 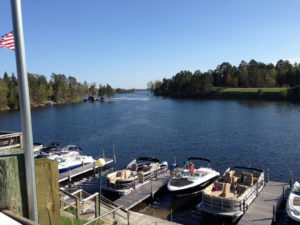 The Crosslake Wastewater Treatment Facility was originally constructed in 2004. The Facility was constructed with a limited budget and has served the City well, consistently meeting all discharge limits. The Facility currently requires significantly more manual control and operation than other typical facilities and is relatively unique in that it receives highly variable flows that tend to peak on weekends when the Facility has the least amount of staffing. As a result, the City has found that the Facility has now become challenging and expensive to operate and due to variable high flows has reached its maximum treatment capacity.

The Crosslake Wastewater Treatment Facility is a critical part of protecting the water quality of the lakes, streams, and wetlands in and around the City. The Facility treats for phosphorus which is one of the primary contributors to excess algae growth in lakes and streams. Due to the soil conditions and limited farming in the area, point sources such as wastewater plants or onsite drainfields are some of the biggest phosphorus sources to lakes in this region. The City is committed to treating its wastewater to a high level, thus significantly reducing any impact on the environment. 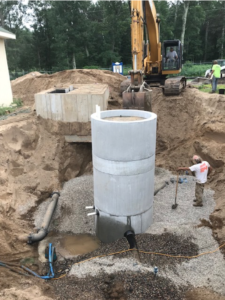 The last of the underground utility work was completed in July with the installation of a rapid mix manhole, yard hydrant, and effluent metering manhole. The effluent metering manhole will allow the city staff to monitor the amount of treated water leaving the plant. The rapid mix manhole will be used to mix chemicals in with the wastewater to help with treatment. The electricians were busy all month with pulling wire through conduits to each piece of equipment. They wired many of these pieces of equipment and are currently waiting for official startups to verify that they are installed properly and function as anticipated. Many startups will take place throughout the month of August as we approach project completion. 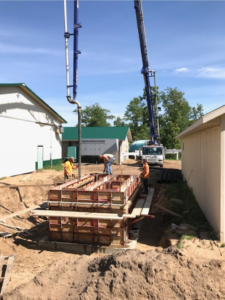 The final concrete pour occurred at the beginning of June for the walls of the control structure. Pressure tests were performed on the watermains that were installed as well. The pressure tests confirm that the new pipe system did not have leaks and that it was properly installed. Electrical work also progressed throughout the month. Vital pieces of equipment and controls to operate pumps and valves were delivered onsite and installed. The majority of the electrical work in the filter building was completed.

Concrete slabs were poured at the beginning of May for the generator and the control structure. Once the control structure slab concrete had cured, the walls were constructed.  The new generator was delivered and carefully set on a concrete slab. The contractor installed both 6” and 4” watermain pipe throughout the site.  The 6” watermain will provide water to the WWTF filter room for use in the backwash cycle and provide water for the emergency vehicle (i.e. fire trucks) load out station. The 4” watermain was installed to connect the new well to the water storage tank. The electrical subcontractor continued progress on the installation of electrical conduits around the site in preparation for new equipment hookup.

Spring finally arrived which allowed the contractor to continue their underground operations. The contractor began the month by installing new drains for the oxidation ditches. Electrical work also began throughout the jobsite preparing for the delivery and startup of the new generator, blowers, control panels, pumps, and site light poles. Wooden forms for a second control structure were set and the rebar reinforcement was tied.

In the beginning of March the contractor pushed to get the Equalization (EQ) Basin online in time for Crosslake’s St. Patrick’s Day celebration that was expected to bring a large number of people to the community. In order to handle the excess wastewater flows anticipated during this event the EQ Basin needed to be operational.  Before the tank could be used in the treatment process the interior of the EQ Basin needed to be sealed and a temporary pump installed. The interior of the tank was first sand blasted and then coated in a black epoxy to protect the concrete surfaces from deterioration as a result of the wastewater storage/treatment process.  During the rest of the month the contractor continued installing valves and process pipe as it was delivered onsite. Multiple blowers were also set in place alongside the EQ Basin and sludge storage tank. These blowers are used to supply oxygen for the treatment process and provide agitation/mixing for the wastewater treatment process.

February was a productive month as the weather began to warmup. Ground thawing units were used to remove frost from the ground. The Contractor needed to do this to install the rest of the site process piping. Concrete was poured for the walls of the control structure and also for the lid of the water storage tank. Concrete grout was poured in the inside of the equalization basin to slope the bottom floor to a sump area where pumps deliver the sewage into the treatment plant at a regulated rate.

Throughout the month of January the Contractor focused on the Equalization (EQ) Basin. The Contractor set forms and poured concrete for the slab of the EQ Basin control structure located on the south end of the EQ Basin. This EQ Basin allows the City to regulate flow to the oxidation ditches so that the treatment process is not compromised during peak usage/wastewater flow events in the City. Process pipe installation for the EQ basin continued throughout the month of January to assure the EQ Basin is fully functional by the St. Patrick’s Day festivities in mid-March.

During December, the Contractor continued progress on the two tanks. Concrete was poured at the beginning of the December for the walls of both structures, as well as for the top slab (cover) of the equalization basin. Installation of process piping was started and various plant upgrades were made which will continue throughout the winter. These process piping changes are necessary to begin to incorporate the new equalization basin into the existing treatment process and to improve the operational ability of the WWTP to meet peak flows experienced during high use periods in the City. The equalization basin is planned to be fully functional by St. Patrick’s Day (mid-March 2018) in anticipation of peak flows experienced with City festivities.  The entire project is planned to be completed by Fall 2018.

During November, the Contractor focused on concrete work associated with the equalization basin and the water storage tank. The main slabs and sump areas for both tanks were poured. The contractor used a concrete pump truck to effectively place the concrete on the tied rebar within the forms. A heat tent was erected by the Contractor to protect the concrete from the cold weather so the concrete would be allowed to properly cure and gain strength. Concrete forms and tied rebar for the water tank walls were placed by the end of November with a planned concrete pour for early December.

On September 15, 2017, the City of Crosslake awarded the 2017 Wastewater Treatment Plant (WWTP) Improvement Project to Eagle Construction Company Inc. from Little Falls, Minnesota for the amount of $2,227,000.00. Starting in October 2017, the contractor began to mobilize equipment and materials onsite to prepare for the construction of the WWTP improvements. Excavation for the new water storage tank, and also the new equalization basin, was completed. Dewatering equipment was used to lower the ground water table so that the contractor could begin construction activities. With the groundwater elevation lowered below the tank excavation, concrete form were placed and rebar tied in preparation for pouring the concrete base slabs at each tank.